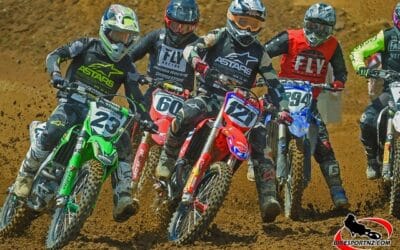 PHOTO: Close racing such as this will again be expected at... 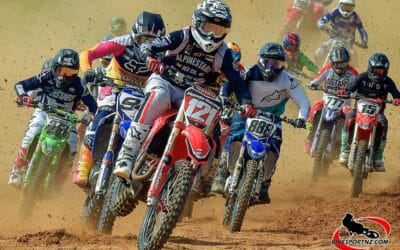 CAPTION: Close racing such as this will again be expected... PHOTO: Close racing such as this will again be expected at Woodville this weekend as riders chase GP titles as well as national championship points. Photo by Andy McGechan, BikesportNZ.com

The heat goes on in more ways than one this weekend as Woodville hosts the first major event of the 2021 motocross season.

With the weather tipped to break thermometers and entries in excess of 600 riders, the obvious popularity and continued growth of the annual New Zealand Motocross Grand Prix at Woodville should ensure another bumper weekend of race action on show this coming Saturday and Sunday (January 30-31).

Racing over the two days will attract thousands of spectators to the Tararua and Manawatu regions, filling motel rooms and camping grounds to the point of overflowing, the Honda-sponsored event at Woodville again proving to be a must-see spectacle.

It is the 60th anniversary of this iconic event, at the eastern end of the Manawatu Gorge, and it will be twice as important because this 2021 edition of the event is also being recognised as the opening round of the senior New Zealand Motocross Championships.

This means the racers will, as usual, arrive for the two-day event in search of GP trophy honours, but also now they'll come to hunt down valuable points towards national titles.

After the Woodville opener, New Zealand Motocross Championship rounds follow at Rotorua on Sunday, February 21, with round three at Pukekohe on Saturday, March 20 (with a junior and mini open event on Sunday, March 21) and the fourth and final round at Taupo on Sunday, March 28.

"The Woodville GP has always been New Zealand's biggest motocross event, but, now that it's incorporating the New Zealand Motocross Championships, with all of the nation's top riders attending, it's going to be even more impressive.

"We have so many riders entered in the MX2 (250cc) class that we will need to hold qualifying races – it's going to be extremely tough just to make the start line – and we were coming close to that in the MX1 class as well, with 37 riders set to line up on Sunday.

"There are 160 riders entered in the mini grade, our sport's nursery ground, which indicates that the sport is in a very healthy state at the moment.

"Only a few months ago we were looking at trimming things back because of the effects of the COVID-19 pandemic, but we're in a much more positive mood now."

There will be plenty of close battles to watch out for over the weekend.

In addition to his annual Woodville GP title bid, Mount Maunganui's Cody Cooper will be focussed on recapturing the national MX1 title at the three rounds of the nationals that follow Woodville. Multi-time national MX1 champion Cooper is a three-time former winner at Woodville – the top man there in 2007, 2014 and again in 2019 – and he'd like nothing better than to win it again.

He has also won the New Zealand MX1 title a creditable seven times in the past and so he will definitely be among the favourites to win again, although rivals such as West Auckland-based former Takaka rider Hamish Harwood – the national MX1 No.3 who won the Woodville crown last year – Hamilton's Kayne Lamont, Waitakere's Ethan Martens, Porangahau's Rhys Carter, Brighton's Campbell King and Taupo duo Brad Groombridge and Wyatt Chase will also fancy their chances.

Former Kiwi international Josiah Natzke, from Mount Maunganui, will also be a feature in this class. He finished runner-up in the MX2 class at the nationals last year and is entered for Woodville in both the MX1 and MX2 categories.

In the MX2 class, Natzke, Mangakino's defending national champion Maximus Purvis and Oparau's James Scott have already proven to be the form riders in recent weeks.

With Tauranga's rising star Brodie Connolly also racing in the MX2 class, as well as the MX125 class, this young man will certainly be one to watch.

"There is no doubt, this year's championships are shaping up to be the best yet and with Woodville in the mix, it will be the year that no one will want to miss," said Broad.

He said the 2021 Honda New Zealand Motocross Grand Prix at Woodville, and all of the other rounds of the nationals too, would be live-streamed on the Sky Sport Next programme.

Only four more sleeps until the 60th Woodville NZ Motocross GP and round one of the NZMX Nationals!
Links below for live streaming!ROUND ONE - THIS WEEKEND AT THE WOODVILLE NZMX GP!!

We're beyond excited to kick off this years Championship series at one of New Zealand's most popular MX Events, The Woodville NZMX Grand Prix. This year is a special one as it's the 60th year this event has been held, so you know their incredible event organisers have it down to a fine art. Make sure you come along to the two day event and cheer on your favourite riders.

For those who can't make the trip be sure to catch all the action live with the official links below:

Thanks to the Woodville Team for allowing us to be a part of your world class event be sure to visit their website for more info/ Tickets and to check out their Sponsors:

Big Thank you to our series sponsors below who support our 4 Round Championship this year. ... Read MoreSee Less

Entries are OPEN for the 2021 NZMX Nationals! See below:

Check out these photos from round two of the NZSBK Championship.
Credit to MJSmyth Images & Bayleigh for these awesome images ... Read MoreSee Less