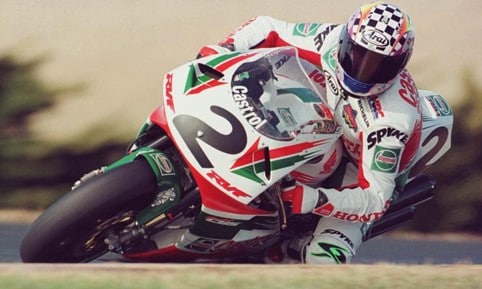 Aaron Slight has to be one of New Zealand’s most successful international motorcycle road racers. Coming from the Wairarapa town of Masterton, the young Slight took up motocross at the age of twelve. It was after the tragic death of fellow Masterton racer Peter Blackwood, in 1984, that Slight began his road race career, when his employer Ross Gregory offered Blackwood’s bikes to ride – a Yamaha RZ250 and a 350. Learning his craft over the next few years on machines from 250cc to 1000cc, he would win many races in New Zealand.

By the mid to late 1980s, Slight had won the New Zealand 250 Production Championship and the Castrol 6 Hour Production race twice, moving to Australia with his own Yamaha TZR250 to gather valuable experience. In 1988, he left New Zealand to race with the Super Angel Team in Japan but had little success.

The campaign did, however, lead to his first major ride in 1989 when he joined Team Kawasaki Australia alongside Robbie Phillis in the Australian Superbike Championship, finishing third at the end of the season.

Sight had a serious crash in Japan the following year, which almost curtailed his career. He would spend much of that year recovering from a very badly injured hand.

He took his second WSBK race victory in Italy and won the Suzuka 8 Hour in Japan for the first time in 1993, before switching from Kawasaki to Honda for the 1994 season.

Slight would also win the Suzuka 8 Hour in 1994 and 1995 for Honda, a hat trick record that would last for over twenty years. It took will 2018 for Yamaha factory rider Kats Nagasuka to win the famous race four years in a row, breaking Slight’s long-standing record.

Coming so close to winning the World Superbike Championship on several occasions, the title of being World Champion eluded Slight. However his racing record speaks for itself:

Recovering from major brain surgery in his final year in 2000 and returning to the WSBK competition after just three months defied all doctors’ expectations. Slight only competed from round seven and would still finish his final year in the World Championship in eight place.

Aaron went on to race British touring cars with some success before returning home to Masterton where he manages various property and business interests.