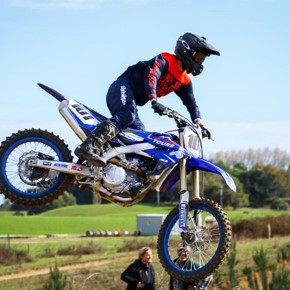 Ben Townley started racing an early age. His first championship win in New Zealand was the North Island 85cc class in the 8-11 year age group in the 1993-94 season. He repeated that achievement in the 1994-95 season and before the decade was out, several other titles came his way too.

Rather than hang around collecting trophies in New Zealand, the 16 year old Townley head for Europe, securing a ride with the German PHASE Suzuki Team in 2001. It was a tough introduction for the kiwi teenager. He left the team towards the end of the season after internal issues and joined forces with the respected Vangani team.

Townley’s second year on the World Championship circuit couldn’t have been more different, being part of a top team with top team mates. Beginning 2002 with his first World Championship podium, a second place at the GP of Valkenswaard in Holland, it was Sweden where he scored his first victory and a number of podiums followed.

Success continued through 2003 riding a KTM. He was now a true championship frontrunner after only three seasons in Europe.

In 2004, as a factory KTM rider on a factory machine, Townley won the MX2 World Championship from future champion Antonio Cairoli and his own team mates.

Armed with latest KTM450, he jumped up to the MX1 Championship in 2005 and would win several races, soon becoming a threat at each round. At the end of the season, he would finish third to Stefan Everts and fellow kiwi Josh Coppins.

Townley signed a deal with Mitch Payton to move to the USA in 2006 and ride for Monster Energy/Pro Circuit Kawasaki. But before the move, he had unfinished business representing New Zealand at the Motocross des Nations in France, where the team finished fifth. However it was Townley’s individual performance that people remember. In the third moto, he finished a close second behind none other than American Ricky Carmichael, who was regarded as the fastest rider in the USA, if not the world, at the time.

Moving to the USA, he settled in Florida. However the success of previous years did not follow him. A serious knee injury while practicing for the East Coast Supercross Championship ruled him out for much of the season.

Returning in 2007, he won the 2007 Supercross Lites East Championship.

In 2008, he signed for American Honda to contest the US Supercross and Motocross Championship, but again suffered a season-ending injury during a training session.

While he continued to compete with some success, he was also dogged by injury and, after five years during which he failed to complete a full season, in 2013 Townley announced his retirement from full-time racing.

But his retirement was abandoned in 2015. He was once again selected to ride for New Zealand at the Motocross des Nations. Again in France, his individual performance stood out, just as it had done 10 years previously. Sixth and second place finishes delivered an opening to ride in the 2016 World Championship for the factory Suzuki team. Once again though, it was not to be. A serious crash ruled him out in June – suffering internal injuries, the 2004 World Champion was out, this time for the last time.

There is no doubt that Ben Townley is one of the fastest riders to come out of New Zealand, keeping company with the likes of Darryll and Shayne King, Darryl Atkins and Josh Coppins. His many wins and successes show that, without the injuries and plain bad luck, he may have even had more victories on the world stage.

These days Townley has business interests and family that keep him busy. In 2019, he was employed as Brand Ambassador for Yamaha in New Zealand and his sons, Levi and Jagger, look as though they may follow in their father’s illustrious footsteps.