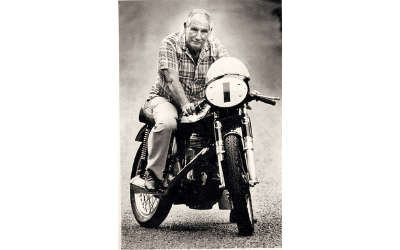 Len Perry was born in 1912 and started riding speedway motorcycles at 15 years old at Hennings Speedway in Mangere, Auckland.

Over the course of his racing career, Perry would win 42 national titles in Speedway, Grass Track, Hill Climb, Beach Racing, Scrambles and Road Racing, including five Senior NZTT and three Junior NZTT titles on Waiheke Island and also a lightweight NZTT at Ardmore, among many other victories and podium finishes. He also won two New Zealand Senior Grand Prix titles at Cust.

He was instrumental in setting up the New Zealand Speedway Control Board which was affiliated to the NZACU and dealt with issues pertaining just to speedway.

As well as racing in New Zealand he also competed in Australia, the Isle of Man and Europe.

Perry was selected to represent New Zealand in the Isle of Man TT in 1939. He crashed at Ballacrane after a too-short front brake cable caused a lock-up over a jump, resulting in his third finger being amputated. By the time he was ready to come back to New Zealand, World War II had started and it took two and a half months to make the journey instead of the usual four weeks due to the extra care needed.

Perry joined the Royal New Zealand Air Force and served in the Pacific. He survived a crash in Fijian waters in 1945, when the Catalina flying boat he was on board dived in to the ocean, killing 12 of the 18 on board. Len was one of the lucky six who were rescued.

Once the war was over, he turned down an offer from the Air Force and returned to civilian life, motorcycle racing and a new business venture.

He returned to the Isle of Man in 1951, captaining the New Zealand team of himself, Rod Coleman and Ken Mudford to second place in the teams category. Perry came in ninth in the Senior TT and finished the Junior TT after machine trouble.

The first time he retired from racing was in 1954, due to a growing family and burgeoning motorcycle business in Auckland. He still, however, managed to win the New Zealand 250cc Championship in 1959.

Perry and his wife Jean had two children, son Geoff and daughter Dale. Geoff would go on to be one of New Zealand’s top riders, until his tragic death in 1973 when a Pan Am Boeing 707 carrying him to the USA crashed off Papeete.

Despite retiring many times, Perry continued to ride ride well into his later years at home and overseas. In 1998 aged 86 he rode his 1951 Isle of Man TT machine at the 100th anniversary of the Dutch TT at Assen.

It was at the 1999 Classics Register meeting at Pukekohe, where Giacomo Agostini made an appearance, that Perry finally retired after 67 years of active racing, this time for good.

While no longer competing, he did continue to ride in parades at the Classics Festival right up to 2001. Len Perry passed away, aged 90, in 2002.