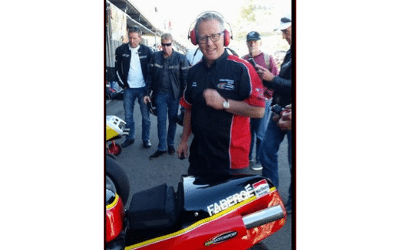 Paul Treacy’s contributions to motorcycle design and engineering has often gone under the radar, however his work behind the scenes in the sport has been remarkable and is deserving of much greater recognition.

A former racer himself, he built and developed bike frames, suspension and engines that rivalled even the work done by the factory teams, assisting several riders to become world champions.

Treacy’s career took him to the United States and then the United Kingdom where he helped Kiwi riders Richard Scoular, Des Barry and Richard Scott to considerable success when racing at the Isle of Man, North West 200 and F1 and F2 World Championship events. He later joined the famous Kenny Roberts Factory Yamaha Team. Paul also assisted Bill Buckley in 1999 and 2000 with his BSL 500 GP project.

Born in New Zealand, Paul went through the New Zealand apprenticeship programme, and was named ‘Apprentice of the Year’ in his final year of training.

Along the way he competed in Hare Scrambles (now known as Cross Country), Enduros and other off-road events which led to him developing Honda XR200s into wild racing machines, a first step towards what would become an illustrious career.  Moving into Road Racing, he prepared a Yamaha XJ750 for the New Zealand Castrol 6 hour race for Scoular and Peter Fleming, who won the 750cc class.

This success led him to the USA, where he developed Yamaha RD350s on a budget that had a gauge always ‘showing empty’. With Scoular as pilot however, the Treacy-prepared machines triumphed over the locals many times, much to their despair.

In 1982,  Treacy hosted one of the first NZ International Six Day Enduro teams as it travelled through the USA on they way to the event. Unable to resist, he followed the team to Wales and worked tirelessly behind the scenes to ensure they had as much mechanical and moral support as possible to get them to the end with the best possible result.

No-one could accuse Treacy of simply preparing standard bikes. He once cut the crankshaft of a VFR750 in half and changed it to a 360 degree configuration to match a factory Honda ridden by Joey Dunlop. Honda was so impressed they asked him to build an NS500 out of parts discarded by the Rothmans GP team of Wayne Gardner and Ron Haslam.

Richard Scott rode a Treacy-prepared bike as a wild card in the 1987 Spanish GP at Jerez and finished tenth. In 1998 Treacy moved into the more complex work of developing data acquisition systems for engine and chassis design of the GP bikes of the Kenny Roberts team. Working closely with Mike Sinclair, they created an adjustable swinging arm pivot, surprising the factory Yamaha teams. Treacy also assisted Bill Buckley in 1999 and 2000 with his BSL 500 GP project.