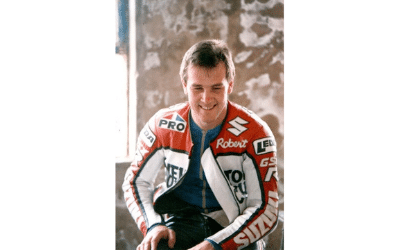 After leaving school, Holden worked with his father before securing a job in the parts department at Wellington Motorcycle Centre. Hey began racing motorcycles soon after.

However, any plans for serious racing he may have had were put on hold after a near fatal road accident. Riding his friend’s bike around the south coast of Wellington, Robert hit a sheet of plasterboard on a blind corner and slid under the rear end of a Humber 80 car, breaking his legs and puncturing his lungs as a result of slamming into the car’s tow bar. On the way to hospital he actually stopped breathing – a very close call.

After a time recovering, Holden eventually returned to the race track. In the 1977-78 season he road a Suzuki RM125, converted for road racing, to victory and his first New Zealand titles: the New Zealand Ultra-lightweight 125cc Championship, the NZ Grand Prix, the NZ 125cc TT and the New Zealand 250cc Hill Climb Championship on a Suzuki 250.

A glittering road racing career that would span almost twenty years had begun.

The era of production racing was an important time for the sport and Holden soon proved he could adapt to any bike, whether it was the best to ride or not. The most successful team of the era was the Suzuki Wellington Motorcycle Centre race team, comprising star riders Dave and Neville Hiscock with Holden as the young pretender. He soon proved his determination, hard charging style versatility.

Whether riding a motocross machine, road race machine, speedway sidecar or doing ‘skids’ on the beach in his car, he excelled. It was not unusual to see Holden race a number of completely different machines at a single race meeting and win on any of them. Championship wins weren’t the only goal – Holden wanted victory regardless of it being a national race, club day or anything that involved competition, on or off the track.

Holden’s best friend Kevin Maxwell recalls: “He was the most competitive person I’ve ever met. Maybe not the best talent but he never wanted to be beaten. He was so determined not just with bikes, just anything. He was happiest when on something with a motor – road racing, motocross, trials, hare scrambles, trail riding, sidecars, saloon cars, midget cars… He pretty much turned his hand to anything and was competitive straight away. Also he just loved having fun and being one of the lads. We got up to a lot of mischief but it was always fun.”

Throughout the 1980s, Holden continued to race in New Zealand, taking many victories and winning various national titles, including the New Zealand Formula One championship twice, once in 1983-84 and again in 1986-87, while also embarking on international campaigns starting with Australia and Canada.

When he parted ways with Suzuki, he began racing Ducatis for various sponsors, including Australian Bob Brown and kiwis Dallas Rankine, Don O’Connor and Grant Vinten.

His international racing took him to the Isle of Man, where he placed second in the 1994 Super Mono TT and won the class in 1995. He also raced in Ireland, Europe and Japan, achieving wins in France, the Ulster Grand Prix and the Northwest 200. He competed in the World Endurance Championship for several seasons for the leading privateer team, Phase One, with some very good top five results.

There are so many memories that riders and fans of the era remember, one that stands out for many was a spectacular crash. Riding a Suzuki GSX1135, more of a touring bike than racer, Holden crashed entering the sweeper at Manfeild and proceeded to demolish the ‘Holden Car’ sign on the outside of the corner. When the dust cleared, there he was, already on his feet, but the bike was rather the worse for wear. The crash was caught on film and later the sequence was printed, the pictures still hanging in Wellington Motorcycles in 2017.

There is one record that will probably never be beaten: his record at the famous Cemetery Circuit in Whanganui – a staggering 47 wins, 22 second places and 22 thirds.

In 1995, his final year at the Cemetery, the reason Robert loved to race showed through. Instead of racing the machine that would have effortlessly won and that he had already raced that day, he chose to fit slick tyres on his dirt bike because “it was more fun”.

Robert Holden died after crashing at Glen Helen during practice week at the Isle of Man TT on 31 May 1996. His ashes were scattered at his much loved Cemetery Circuit in Whanganui.