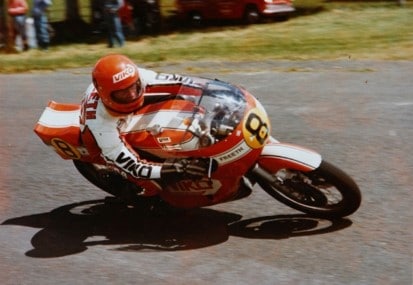 Rodger Freeth showed academic brilliance when he was named Dux of Papakura High School and first started motorcycling as a cheap way of getting to university. The motorcycle racing ‘bug’ bit him soon after.

Freeth started production racing while studying physics at Auckland University, first on a Triumph Daytona 500, then a Kawasaki Mach III.

He eventually gained a Doctorate in Astrophysics, still racing motorcycles. His thesis was on binary star systems (two suns) and black holes at a time when most people had heard of neither.

While studying at Auckland University, he was awarded New Zealand’s only ever ‘University Blue’ in recognition of his winning the NZ Road Race Championship on a Suzuki TR500.

He replaced the Suzuki with a second hand TZ750 Yamaha to race in the Marlboro Series in the late 1970s and tried many modifications, including fitting aerofoils to the front and back suspension. He was very disappointed when these were quickly banned on safely grounds.

Freeth was then sponsored by Rod Coleman, New Zealand’s Suzuki importer, who provided him with successive brand new Suzuki RG500 GP bikes, which he rode with distinction.

In 1979, the projected late arrival of the second Suzuki Grand Prix RG500 resulted in the building of the first McIntosh Suzuki and a string of 10 wins, the first for a 4-stroke machine in NZ Open Class racing for many years.

This is where Freeth’s people skills came into their own as, within a week, he persuaded a young Ken McIntosh to modify the McIntosh chassis, originally designed for a Kawasaki engine, to take a Suzuki engine. He then talked Alan Skousgaard from Tirau, (whom he had never met), into lending his newly ordered McIntosh chassis, and persuaded Keith Turner, (whom he had also never met), into lending his almost-new Pops Yoshimura GS1000R race motor.

Over the next five years, Ken McIntosh built four new McIntosh Suzukis for Freeth, with Alan Skousgaard’s original ‘investment’ being transferred as each bike was replaced.

That Freeth was a very good rider is easily proved by the results, with multiple New Zealand Championships and national titles, but where he really shone was at Bathurst in NSW, Australia. The long, super high-speed track suited his high level of fitness and concentration and he was always the fastest ‘over the top of the mountain’ of all the Aussie and NZ riders in the Arai 500 feature race. Two wins (in 1982 and 1985) and a second (in 1984) were his reward for 500km and over three hours of faultless solo riding. In 1982, with 80 starters in the race, the virtually unknown New Zealand team won by more than a lap and set a new race record.

To quote Ken McIntosh: “I would make the parts and Rodger would try to (mostly unsuccessfully) destruction test them.” It was a great period for New Zealand-designed and built bikes.

Freeth was not a trained mechanic, but with the workshop manual propped up on a book stand, he assembled plenty of GSX1100 and TZ750 engines that finished races and won championships. Another skill mastered…

The fact that he was sponsored by CRC for so many years, racing both bikes and cars, was also a mark of the loyalty of those around him.

He was also well-known in rally car circles (as co-driver for NZ Champions Neil Allport and “Possum” Bourne), car racing (1998 NZ Sports Sedan Champion 1988 in his Toyota Starlet V8), and as a Doctor of Astrophysics.

Freeth retired from motorcycle racing after cutting the tendons in his right hand lifting Neil Allport’s rally car back onto the road in the USA. It took a year to to recover the full use of his hand.

Rodger Freeth later became a full time professional co-driver for his great friend Peter “Possum” Borne and was tragically killed in a crash in a World Rally Championship round in Western Australia in 1993.

His funeral was held in the Auckland Town Hall with over 2000 people attending. That surely says it all.