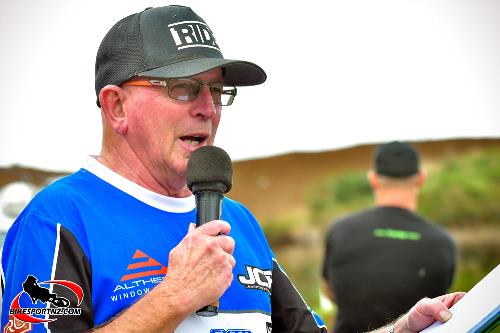 As a man who has been commentating motorcycle sport every year since he began in Taihape in 1982, Neil Ritchie has been at the centre of all motorcycling activities in New Zealand, working as one of the ‘backyard boys’, for over 36 years.

Neil is certainly the voice of motorcycling in New Zealand, something which has also spilled over into other arenas, as he now also receives requests from other sporting bodies including monster truck racing, big digger competitions and more, although his first passion is motorcycling.

His voice carries over the noise of revving engines in rain, hail and snow or, as has also been witnessed, in 30-degree-plus temperatures at the annual Honda New Zealand Motocross Grand Prix at Woodville.

He has commentated motocross, supercross, road racing, cross country and extreme stadium enduro cross events over the years, as well as delivering eloquent formal addresses and moving eulogies at funerals. Recently joined by son Brad, ‘Turbo Tonsils’ is a fixture on the national circuits, commentating the New Zealand Motocross and New Zealand Superbike Championships each year.

Neil was honoured with the Munro Family Trophy at the 2019 Burt Munro Challenge, an event he has commentated since the year that followed the inaugural running in 2006. His 11-year involvement was highlighted with his receiving the event’s top award, the first time a non-rider had been so honoured, although he certainly fits the bill as a man who will work tirelessly in even the most adverse of situations.